Wort boiling is a necessary part of beer brewing, and a series of changes occur in the process that have important implications for the brewing process.

1.Helpful for the dissolution and transformation of hop components, and the formation and separation of protein-polyphenol complexes

The polyphenolic substances in hops and malt are completely dissolved in wort and combined with proteins. Proteins and polyphenolic substances as well as complexes formed by proteins and post-oxidized polyphenol substances are insoluble when heated and precipitate in the form of coagulants when boiled (flocs), which should be separated from the wort as much as possible. If the boiling time is not enough, there is a residue in the wort, which will precipitate during the beer fermentation process, causing the beer to be turbid.

For almost 20 years, we have communicated with thousands of breweries and master brewers around the world. And helped many breweries build their brewing systems. You can learn more about brewing equipment here.

Wort is essentially a nutrient-rich sugar liquid, an ideal environment for microbial life, and allowing it to grow will cause the beer to deteriorate and affect the flavor.

Destroy the enzymes in wort

Boiling will end the mashing process that converts starch into sugars. Perhaps it can be said that the most important role of boiling wort is to inhibit the activity of residual enzymes after the mashing process. Inhibiting the activity of enzymes can maintain the desired sugar / mash ratio. If the enzyme-catalyzed process continues, it will produce a “thin” beer with very poor taste characteristics. 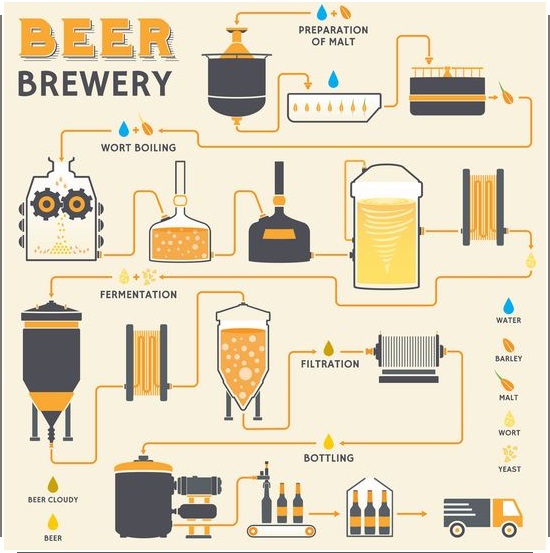 2.Evaporate the water to make the sugar degree reaches an ideal range and improve the color of the wort

Wort evaporation of 10 to 15 percent has long been a hallmark of a good kettle tun. Today, the evaporation intensity (i.e., the total evaporation rate) is used instead.

The whole boiling process will last 1-2 hours. Steam heating equipment generally from the beginning of heating to boiling state stage is opening the side wall jacket and the bottom jacket at the same time, in order to ensure the shortest time to reach boiling state; In the continuous boiling stage, it is necessary to reduce or close the sidewall jacket pressure and continuously heat the boiling at the bottom, which can achieve the effect of tumbling and accelerate the mixing of excipients. At the same time, it prevents the problem that the material dries up due to the high temperature of the sidewall and eventually makes it difficult to clean.

3.Promote the formation of some reducing substances

During the boiling process of wort, reducing substances that can bind to the oxygen in the wort, such as Melanoidins, will be formed.

4.Reduce the content of some substances that are not conducive to beer flavor, such as Dimethyl Sulfur (DMS)

DMS is a volatile sulfur-containing compound with an unpleasant odor and taste that affects the taste and flavor of the beer. At the boiling temperature, the half-life of the DMS precursor SMM is about 40 minutes, and the precursor of dimethyl sulfur can be decomposed into free dimethyl sulfur during the boiling process, which can be dissipated with the evaporation of water.

YoLong Brewtech has been engaged in consulting, design and manufacture of professional beer brewing equipment since 2004. And are actively sharing our expertise on more brewing and equipment. If you have any questions or requirements about brewing equipment, you can contact our professional technical engineers to find the answer. Contact Us!