The German beer culture has caught on and become a critical part of our lives. Nowadays, some people are looking to brew for themselves, which requires the use of brewing equipment. Nevertheless, the process of making beer has proved to be involving and sensitive, meaning one must take care in every aspect of the creation process. One of the best ways to ensure that care is taken is thorough cleaning and sanitizing of the nano brewery equipment. Additionally, the environment in which the beer is being made should be cleaned and disinfected to ensure that the beer is healthy and well preserved. As such, there are a few things that need full attention. 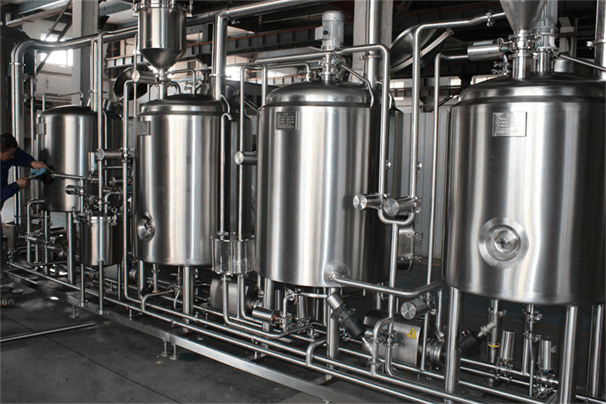 Scrubbing has proved the most effective way of cleaning equipment. However, it is impractical to clean commercial brewery equipment as it might take many hours to clean. Consequently, it is advisable to use cleaning agents besides scrubbing to ensure the equipment are clean. It is imperative to avoid damaging the machine during the cleaning process. Using a sponge or a soft cloth reduces any chances of causing any damage. Most household cleaners should be avoided as they are not suitable for human consumption.

Percarbonates: It is a mixture of sodium carbonate and hydrogen peroxide. The mixture has proved useful during the cleaning process. Cleaning is ensured through activation of oxygen that makes the whole solution to become alkali. This mixture is not only fit for consumption, but it’s also environmentally friendly.

Chlorine: It is highly useful to clean both used and new brewery equipment. However, it should only be used to clean metal equipment as it reacts to plastic.

Powder brewery wash: Most of the equipment used has odd shapes that make it impossible to scrub. As such, it is advisable to invest in a stronger solution that will help remove stubborn dirt from the equipment.

Sterilization is necessary when cleaning equipment as it removes organisms that might cause batch spoilage. The following products can be used for sterilization;

Star san: It is useful in killing microorganisms, and it also has no odor and flavor. Also, it leaves a protective film that keeps protecting the equipment after use.

Iodophor: It is widely used in the food and medical industry for sanitizing food. It is a mixture of sanitizer, iodine detergent, and germicide.

Heat: It is used to sanitize equipment through boiling or use of dry heat. When using heat, one should make sure they stick below the melting point of equipment being sanitized and also to slowly cool them to avoid breakage.

A room must be well ventilated due to the gases by various burners. For example, when working in a poorly ventilated place can cause carbon monoxide poisoning if using propane burners. In most cases, the side effects range from a mild headache to fainting in the case of extreme levels of carbon monoxide.

During a brewing day, one should fit on protective gear to avoid sustaining any form of injuries. Equipment used in nano brewery varies from hot to sharp and may cause severe injuries if they come in touch with any part of the body. To protect such burns and injuries, one should not work in a brewery with open-toed shoes or touch a boiling kettle without having the safety boots and protective gloves on. Additionally, one should wear a respiratory mask when milling grain. This is to protect the person from harmful bacteria that are present in grains.

When working in a brewery, one should expect spills from time to time. A spill might cause one to fall over and hurt his elbow, knees, and also it might result in burns. As such, spills should be quickly cleaned as a failure to do that might prove hazardous wellbeing of the workers.

It is easy to forget to fasten hose clamps which are usually loose after several times of being in use. Well fastened clamps help reduce the chances of a hose being blown off after pressurized pump is fired up, thus sending hot water and wort flying.

Not testing the gravity of beer before bottling can prove to be costly afterward. One should make sure that the beer being bottled is fully fermented to avoid chances of the bottle exploding as they can cause serious injuries or damage to the other equipment. To prevent bad blow ups, one should consider putting the bottles inside a box to reduce the chances of damage occurring in the event something goes wrong.

Planning for a brewing day in advance makes the whole process much safer. It allows one to arrange the equipment and the room as they desire, thus reducing the chances of being injured. In most cases, when one starts brewing without prior planning, the exercise usually leads to frantic actions, which might result in injuries.

Boilovers are a common occurrence during the homebrewing process. Boilovers are common during boiling and hop addition as that is when beer tends to foam quickly. One should be attentive to the kettle and act as required if they notice a boilover. To prevent such issues, one should always have a larger kettle than the boil volume. Failure to have appropriate measures in place can lead to burns and also flare-ups on open flame burners.

Glass carboy necks are not very firm and can snap off and shatter, resulting in cuts. It is advisable for one not to carry full carboy by the carboy handle only. Instead, one should consider products like bucket sling and brew hauler.

Nano-brewing equipment has been made highly available, but the quality of the beer is dependent on other aspects such as cleanliness. No one should overlook the significance of such an element if they are to be successful. Also, all the guidelines on how to handle and maintain equipment should be adhered to for the well-being of the people using them.

Want to join the discussion?
Feel free to contribute!

Raw Materials and Equipment Required for Homebrewing
Scroll to top