How to successfully open your own microbrewery？

Starting to open a new microbrewery is exciting, but it’s also a lot of work. First you have to find the right location, then you need to decide what equipment to buy from microbrewery supplies and how much space it all needs. And that doesn’t even take into account the actual brewing process—which can be tricky! We’re here to help you navigate all those steps with our step-by-step guide on how to successfully open your own microbrewery:

1: The process of starting your microbrewery 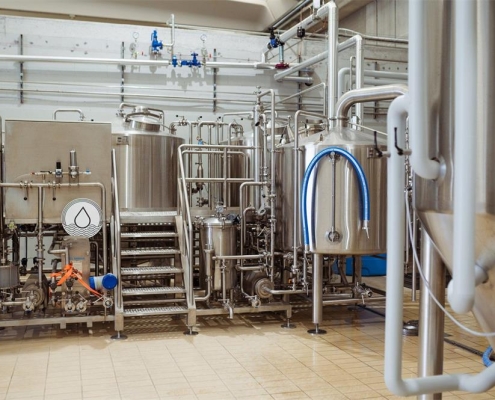 The process of starting your microbrewery

Whether you’re a craft beer aficionado or a novice, there are many considerations to be made when starting your microbrewery. You’ll need to decide on which Microbrewery equipment and Brewpub system will work best for your business. A good place to start is by looking at the different types of beer brewing systems that are available:

Micro / Commercial Brewery systems use a mash tun, lauter tun and kettle / whirlpool to start the process. These three large pieces of micro brewing equipment can be used in conjunction with smaller pieces like fermenters and energy devices and other accessories like centrifuge,pasteurizer,canning line etc . They are designed for larger batches of beer (7 barrel brewing system or more) than other systems that require less space but don’t have as much flexibility in terms of batch size.

Brew pub equipment is similar to brewery systems but scaled down considerably; they are often used by small businesses such as pubs or restaurants that serve only their own beers on tap(less than 7bbl brewhouse). This type of system includes all four main components (mash tun, lauter tun, kettle and fermenters) but doesn’t include pumps or heat exchangers used for cooling hot wort during fermentation—these parts must be purchased separately if needed.

Brewery output: This is the volume of beer that your brewery can produce on a monthly / annually basis. Usually refers to: 7 barrel brewing system per batch, It’s important to keep in mind that every brewery will have its own unique capacity, based on factors like equipment, labor resources and others.

Usually in the stage of building the brewery that you also need to consider the future expansion in next coming years, not means you can just add more fermenters but also noted the brewhouse size & the automation level to suit for the several batches per day. This is what microbrewery supplies has to do before suggesting it for you, When the brewhouse size was finalised that we usually recommend get the brewhouse with as high as possible automation level, which is a different part like fermenter you can easily adding in future,instead it’s would be very difficult to upgrades once complete the production and even require re-build the control system with a few mechanical structures on site. So keep in mind going with the high automation system for the brewhouse of the micro / commercial brewery.

Brewpub business scope: A brewpub is a restaurant which produces beer for on-premise consumption.

On the other hand the micro / commercial brewery will mostly selling on the contract supplying, like for the supermarket, hospitiality industry,these kind of stable selling style.

So considering your selling style is another factor to decide what kind of brewery you’ll build.

So Microbreweries / Pubs are often smaller than large-scale breweries; therefore their micro brewery equipment needs are not as extensive or complex as larger operations’ machinery needs. However there are still several pieces of equipment needed for brewing small batches at home such as refrigerators for storing ingredients and fermenters for fermenting beer after it has been brewed. Microbreweries also need kegging machines so they can fill up growlers from their taps – these come in handy when customers want take away their drinks rather than drinking from glasses inside.* A great way to save money while building out your own microbrewery is by shopping online at sites like Probrewer where quality microbrewery equipment comes at affordable prices! There are many brewing systems for sale here to choose from.

Or directly look for microbrewery supplies in the brewers association.

But for the commercial breweries that the things changed, what the factor they need to consider is the brewing efficiency and reliability, in this case for the configuration are mostly the high automation type, From the malt handling to the brewhouse to the fermentation control to the package etc…

The location / layout of your brewery will have a significant impact on your business. While some microbrewers choose to set up shop in a rural area where land is cheap, others choose urban locations so that they can be closer to their target audience. If you want to open up an urban microbrewery, it’s important that you find an appropriate space for brewing and taproom operations.

The layout of your brewery will also play a role in how long it takes you to start making money from beer sales. A well-thought-out floor plan will make things easier for everyone involved: employees won’t waste time getting from one place to another; customers won’t get lost when trying to find their favorite beers; and there will be fewer opportunities for accidents or injuries due to poor safety precautions during production activities like cleaning tanks or moving heavy equipment around the facility without proper training first (or even worse–without proper supervision!).

We’re looking on the aspect from the production aera which will be affecting the brewery running a lot, Firstly make the simple layout sketch with the equipment <real scale> for details checking and get the land using as high as efficient. In the meaning get each modules placed in the most reasonable positions and promise all of this could be able to running closely also separately. As a trusted microbrewery supplies, We’ll be also consider your possible expansion in future and get a planing for the future expansion even if in the start of brewery setting up stage.

While you’re deciding on a location for your brewery, you can also start to think about the equipment that you’ll need.

Here are some successful cases for reference.

In the discussion period that we get understanding the demanding from the clients and then share more options and advises of how to achieve these perfectly and until get the client totally understand what kind of brewery equipment should be the suitable one. A long period maybe but also be a essential process to get both understanding each other completely. Not two brewery equipment are totally same and also means for each one are designed for your specifically.

In order to install and maintain all of this equipment, it’s important that you hire qualified staff members who are familiar with all areas of brewing: from electrical engineering and mechanical engineering services through project management and construction services. You’ll also want people who understand how each piece works together so they’ll know what needs repair when something goes wrong (and believe us when we say “something will go wrong”). Even if YoLong only work as the manufacture but we also providing the detailed installation manual and elec diagram for the end user referring to the installation and wiring. Especially for the high automation system that we have the programmer be able to commissioning the system online during installation. Just let’s know you need help!

Starting a microbrewery can be a fun and rewarding experience. You’ll have the opportunity to work with your hands on a product that you can share with friends, family and strangers alike. The process of starting your microbrewery will take time but it will be worth it in the end!

Read more
How Much Does it Cost to Open a Brewery?

What should be paid attention to in the safe operation of breweries?
Scroll to top