Attic Brew was a young brewery based in Birmingham but it’s developing at an unbelievable speed, It was established by a few college graduates in 2018 and during the brewery start stage that they can only buy a few two-hands equipment locally, But they’ve been upgrading their brewery as they’ve grown, And until 2021 they’ve made an important decision of complete upgrading their brewery by adding a brand new 30HL automated commercial brew kit.

After their CEO’s long term discussions with the suppliers from all world, YoLong Brewtech was proud of being the vendor of this project, But the series of tech difficulties also following, Firstly the brewery was based in an ancient building which maybe built in last century, the questions of us is how to design this brewkit to suit for the existed narrow building, Secondly was the questions of the customize the clients requirement and the interactions between the new products with the existed systems etc..

After several month’s works by YoLong Tech team, we finally provided the below design:- 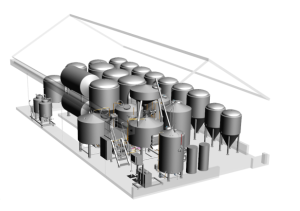 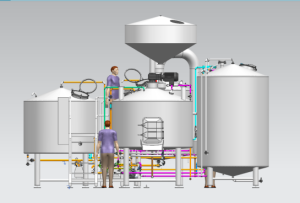 Firstly it’s a 30HL automated brewkit with steam heating and comprised of MMLT, KT,WP, Either keeping the working efficiency or keeping the cost-effective. Actually, regarding the 30HL brewkit, the lauter tun’s overall diameter is still a critical condition of load by usual container or not. Once the overall diameter exceeds 2250mm that means the usual container will be unavailable and gotta use the flat rack to load and cost .much more freight. The end-user mentioned that they’ll use the oat in their brew grain and that will cost 15% mash efficiency drop, So in this case if working on a 17 P brew that the required grain would be 930kg approx and currently the thickness of grain bed in lauter tun would be 460mm. And this works for the end-user and as discussed if for some heavy brews that they can brew with half batch.

In this brewkit we gave up the usual ”row” brewhouse design character we always insisted on, The main reason was their building isn’t wide enough, So in the current design that could help reduce much more space costs. But the following challenge for us is the layout of the pipeline,  Finally, we did it, and looks excellent.

Two tanks beside of brewhouse were the water station_ 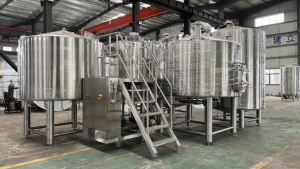 As we speak, the equipment is on its way to British and the end-user suppose put them into service in Jan of 2022. So we’ll keep you guys posted on the following steps.

Read more
Remote Control Applications in Brewing Equipment – How does it work?