The YoLong team is back from Melbourne, Australia, where we were proud to exhibit some of our equipment at BrewCon19, the 7th Australian Brewers Conference & Trade Expo, which is held every year by the Independent Brewers Association.

Only one word can describe the event experience – epic! Everything to do with the world of high quality beer, and the brewery equipment that produces it, was on show at the Melbourne Convention Centre. From Tuesday September 3, and lasting four days until Friday, the conference presented the many visitors with the most outstanding beer-related products available on this side of the world! 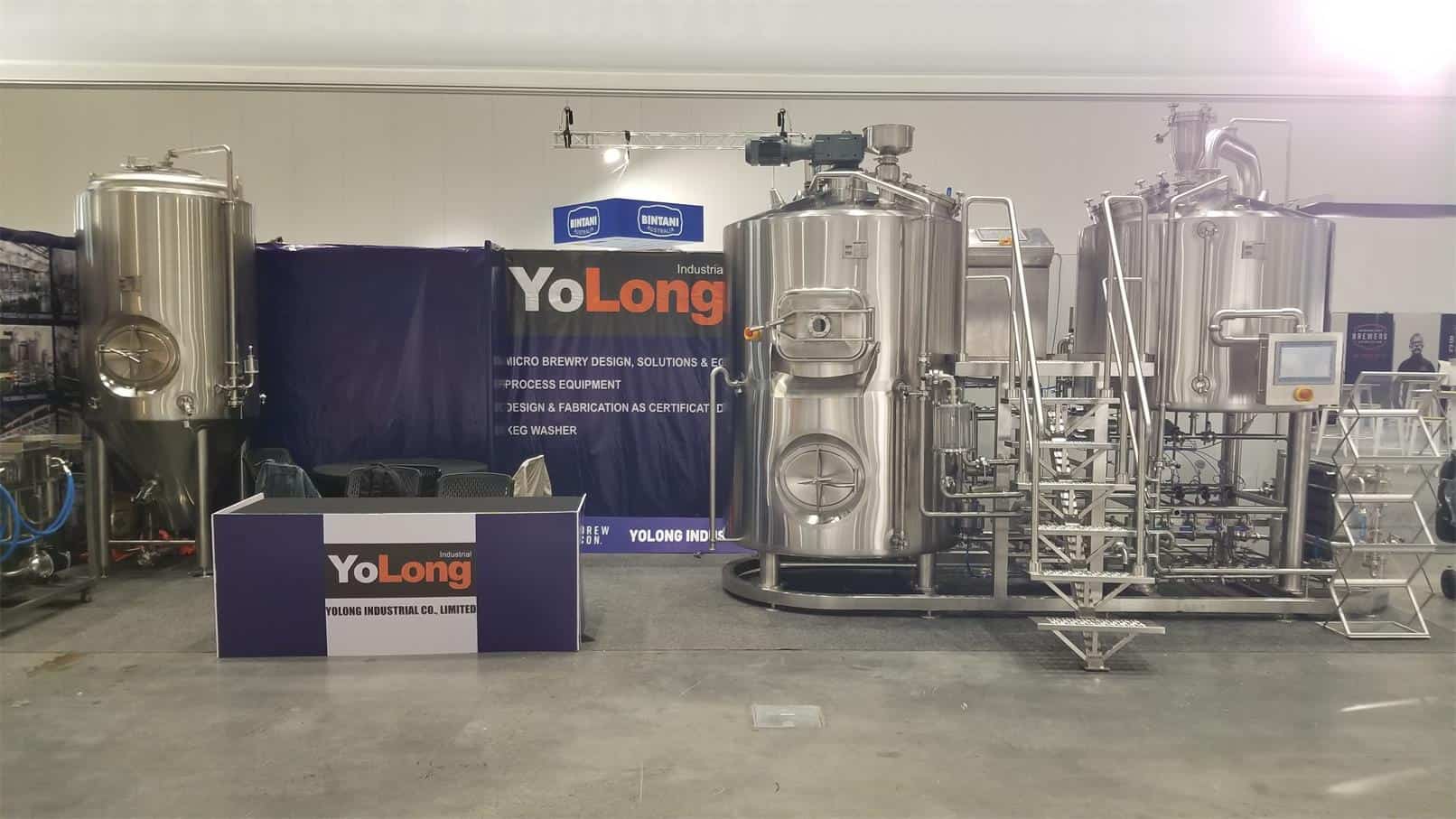 YoLong have our own take on the exiting few days we spent in Melbourne. You can call it the YoLong Beer Diary, because the BrewCon19 event makes for interesting reading. If you attended the Independent Brewers Association Trade Expo 2019, please let us know in the Comments section what you thought of the exhibits on show.

The YoLong team touched down at Melbourne airport on Monday September 2nd. There was no time to waste and after a quick trip to the hotel, we spent the rest of the day getting to know the beautiful city of Melbourne a bit better. It was very exciting being able to explore the streets where the annual Chinese New Year festival celebrations are held. 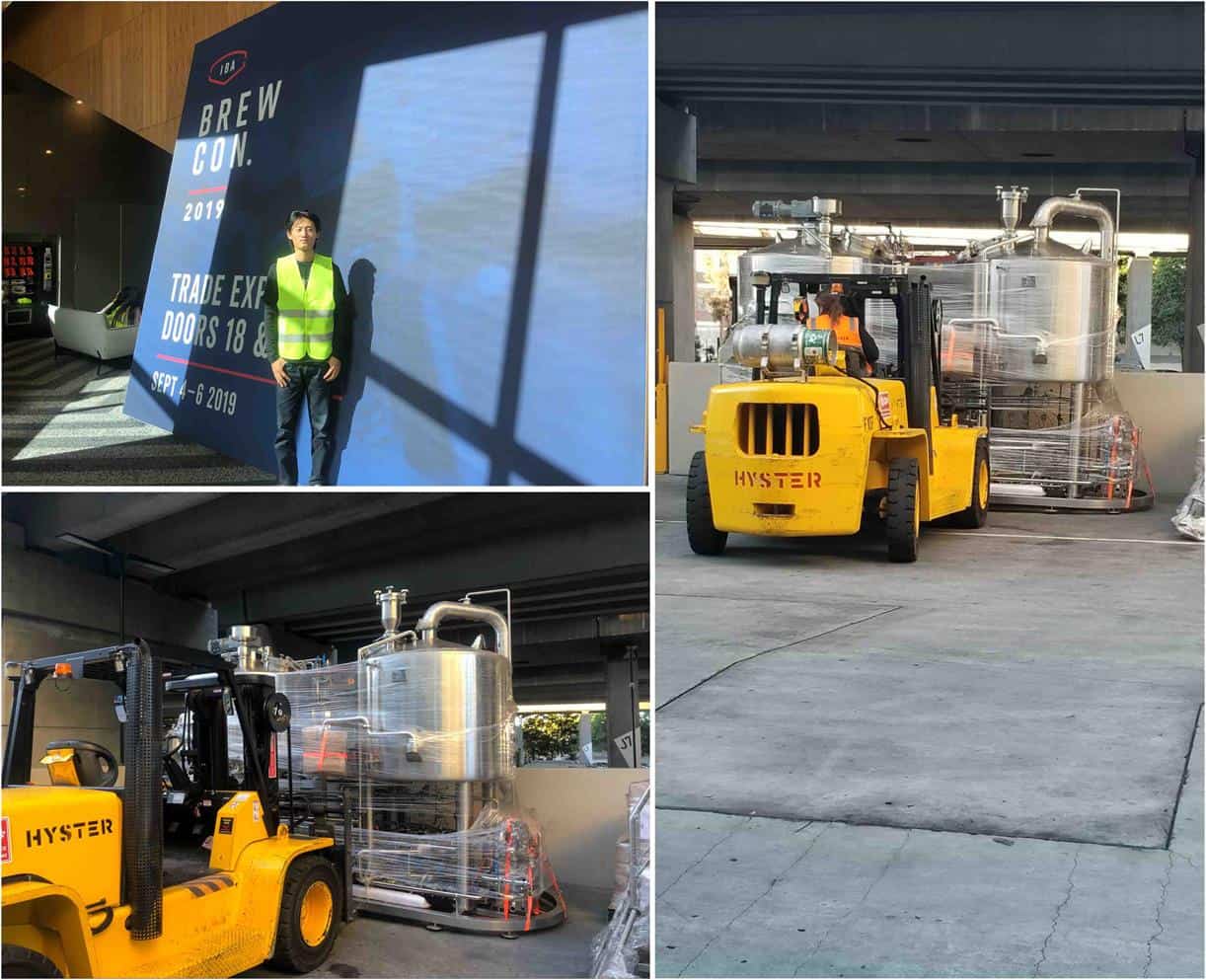 Our guide showed us around Queensbridge Square, South Wharf, and Docklands, before a quick look at Queen Victoria Market and finally, back to the hotel. That evening, the YoLong brewery equipment arrived at the Melbourne Convention Centre, and waited for the team’s arrival before it could be set it up at stands 40 to 42.

Setting Up the YoLong Fully Automatic 10bbl Brewhouse at BrewCon19

The brewery equipment YoLong Industries manufacture is fully functional and ready to begin use when it leaves our factory floor. Because the equipment arrives already assembled, it was simply a matter of safely placing it at stands 40 – 42, and unwrapping the fully automatic 10bbl YoLong brewhouse before the visitors started arriving. 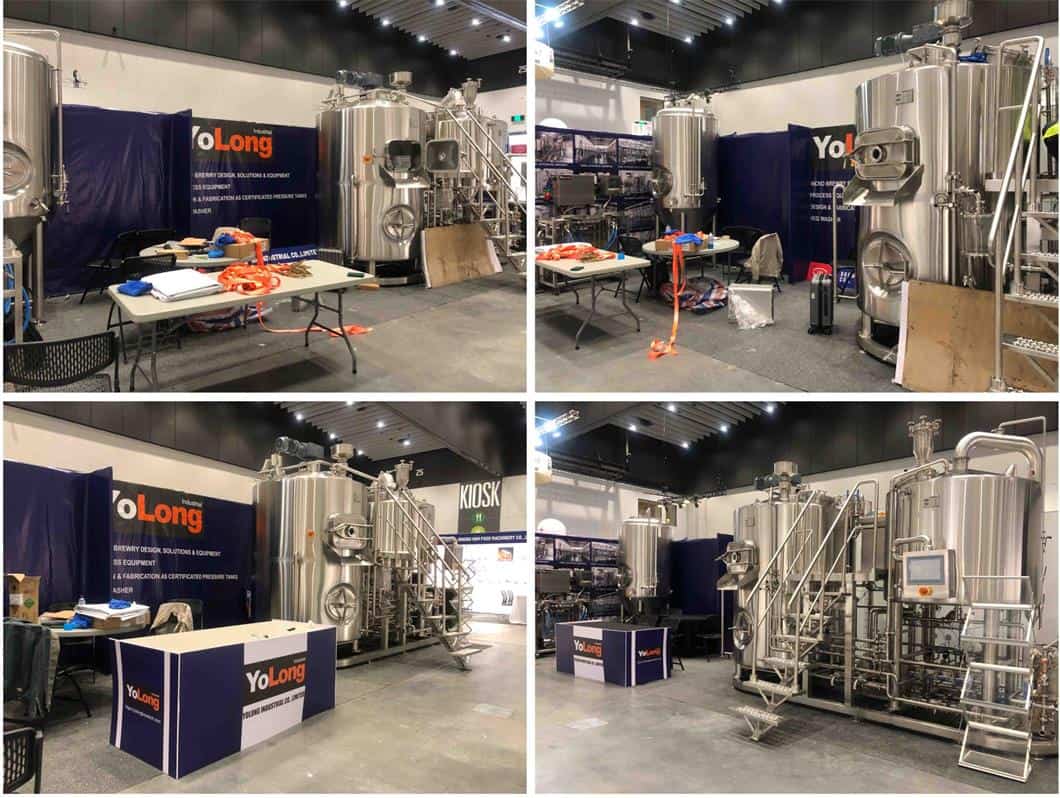 The YoLong team was very excited to be able to introduce the fully automatic 10bbl Brewhouse to a wider audience at Australia’s premier beer industry keystone event. Getting in touch with visitors and fellow beer equipment enthusiasts was one of the highlights of BrewCon19. YoLong brewery equipment is cutting edge technology linked to the highest quality production standards, and our stands were considered to be one of the most striking ones at the event.

Both commercial and independent beer producers attended the event to keep up to date with what is happening in the world of beer and brewery equipment innovations. YoLong wanted the impressive Brewhouse to be there to greet visitors when they made their way to our side of the convention centre. Many hours were spent placing the brewhouse in the right place and ensuring the Siemens touchscreen control cabinet was operational.

The advantages of having a fully automatic brewhouse is that the touchscreen is operational on both stations. There is also a racking arm that can be used in conjunction with the cellar control panel. The racking arm and sample valve, that YoLong produce, have been designed to control and eliminate beer contact with the threaded fittings. It ensures the path the beer takes, both in and out of the racking arm and valve, is smooth. This reduces the areas where dried yeast and beer can hide and possibly contaminate the beer itself. 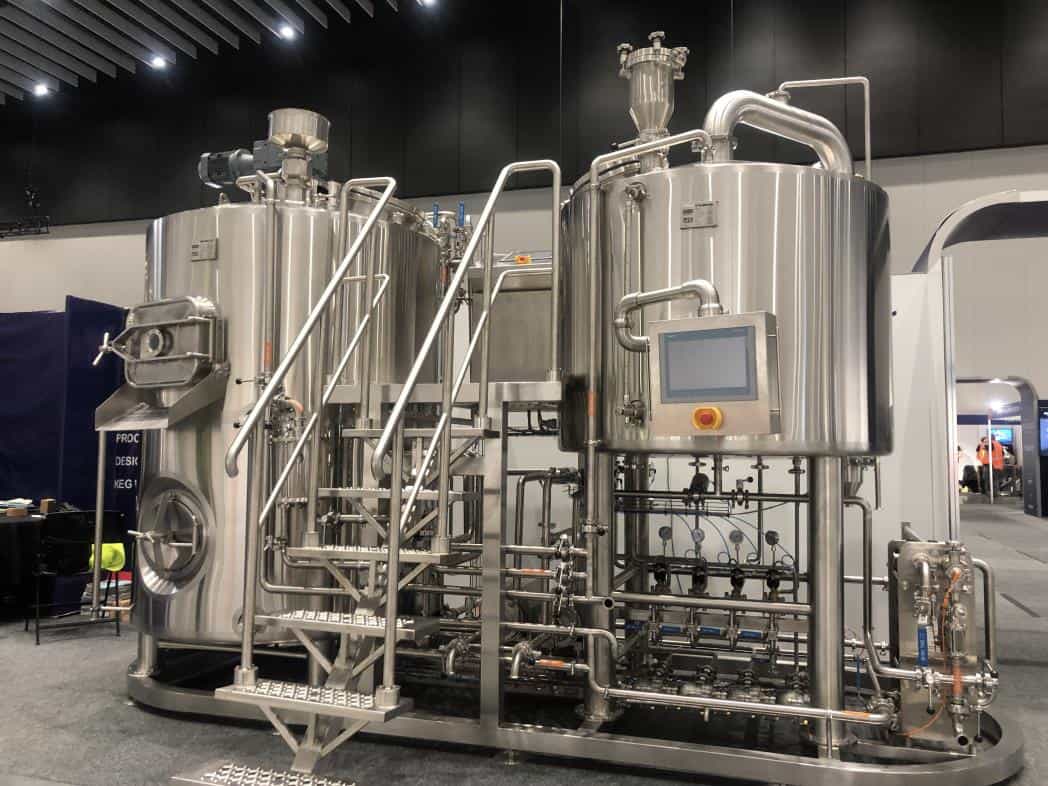 BrewCon19: What Visitors to the YoLong Stands Liked the Best

The event opened officially on Wednesday. Industry professionals and interested visitors from every corner of Australia made their way through the entrance to check out the latest developments and most recent launches in the production of beer and brewery equipment.

The YoLong stand had everyone stopping by to take a look at the massive, gleaming, and  functional fully automatic 10bbl brewhouse. Although this set up is suitable for the launch or expansion of an independent brewery, there were a few visitors who were interested in finding out more about the commercial brewery equipment that YoLong Industries designs, fabricates, transports, and installs all over the world. 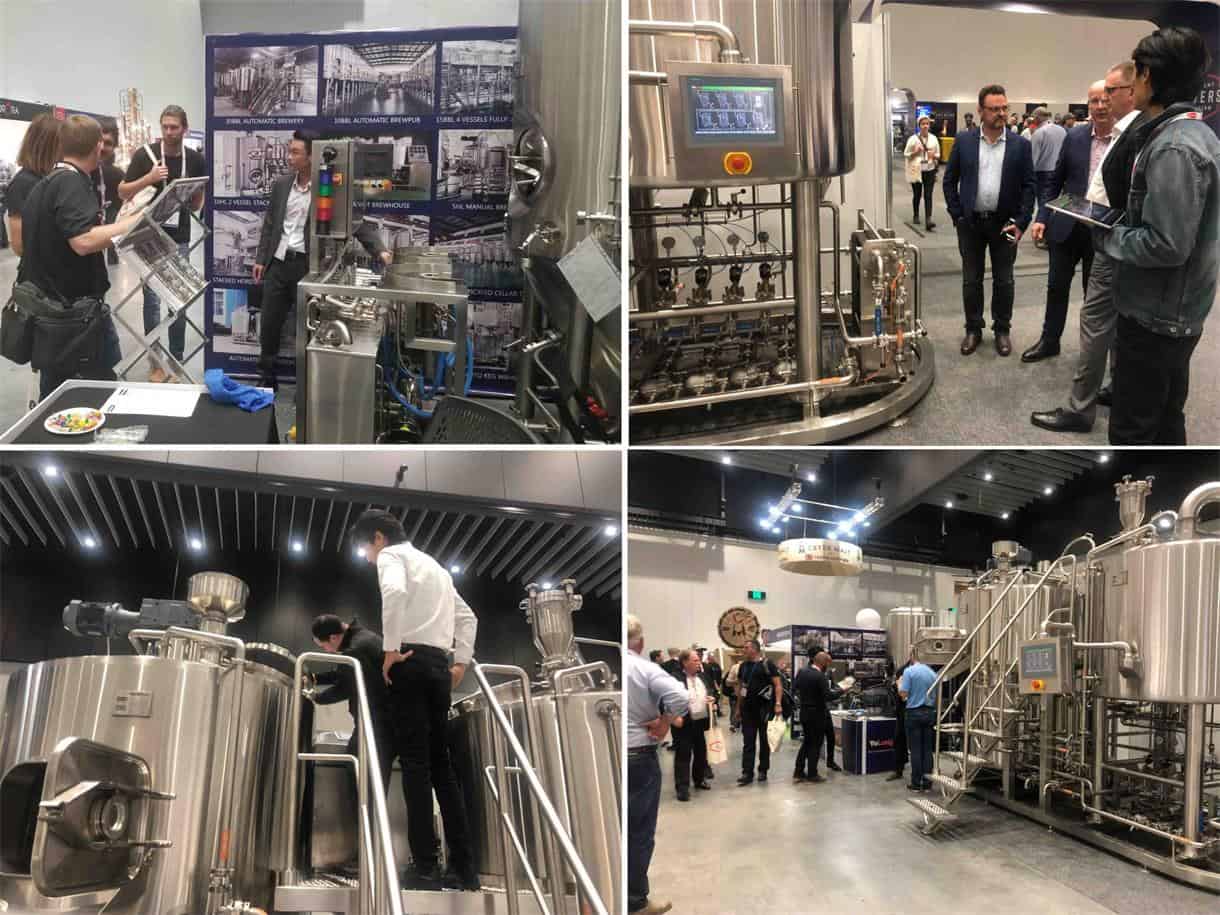 Visitors Getting to Know the Fully Automatic 10bbl Brewhouse Better

No independent brewmaster sets out to establish a brand for it to stay small and relatively unknown. The YoLong team fielded many questions about the best way to expand a small brewery into a bigger enterprise. This works in two ways:

This does not necessarily mean that the brewmaster loses the beer brand’s uniqueness and freedom to experiment with new recipes and flavours; all an independent brewery expansion means is that the brewery is now capable of producing more beer for their happy customers to buy at other distribution points. These are the reasons why the question on how to expand a brewery was such a popular one to ask our expert team at the YoLong stand.

The stairs that offered our visitors a closer look at the internal workings of the YoLong brewhouse proved to be very interesting for many people. People were climbing up and down them all day. We feel confident in saying that climbing those stairs became a must-do activity at BrewCon19!

What Did the Exhibitors and Visitors Have to Say About the YoLong BrewCon19 Display?

YoLong consider our time at BrewCon19 very successful. Our team met many people and were able to assist with every beer-related inquiry. It was very kind of the visitors to the YoLong stand to say that the display was the best in the exhibition. When Ellerslie Hop Estate: hops, malt and brewing supplies representative, Greg came to chat with us, he was very kind to say he rated the YoLong display the most outstanding one on show that year.

If you were not able to make it to the event, let us tell you a bit more about the equipment the YoLong team transported to Melbourne.

YoLong Rake Arm for Mash Lauter Tun: What do the rake arms in the lauter tun do?

The finished mash is transferred from the mash tun into the circular lauter tun. It’s here that the viscosity of the wort is reduced when the mash is heated. Using a rake arm in the lauter tun prevents the grain from compacting and clogging the filter mesh with a stuck sparge.

Stuck sparge is a nightmare for all grain beers. It occurs when the filter mesh and grain bed at the bottom of the lauter tun become backed up and prevent the wort from flowing. YoLong lauter tuns have pressure sensors, usually one situated near the bottom of the bed and one situated higher up. The brewmaster, or the automated system in the brewhouse control system, can read the differences in the two pressures and use the rake arm at various speeds to prevent sticking.

Rake arms aren’t necessary in a homebrew set up. This is because it is the weight of the mash grain in the lauter tun that causes the sticking. Even on a small commercial or independent brewery set up, adjustable height rake arms are an essential item for maintaining the flow of the wort from the spent grains. 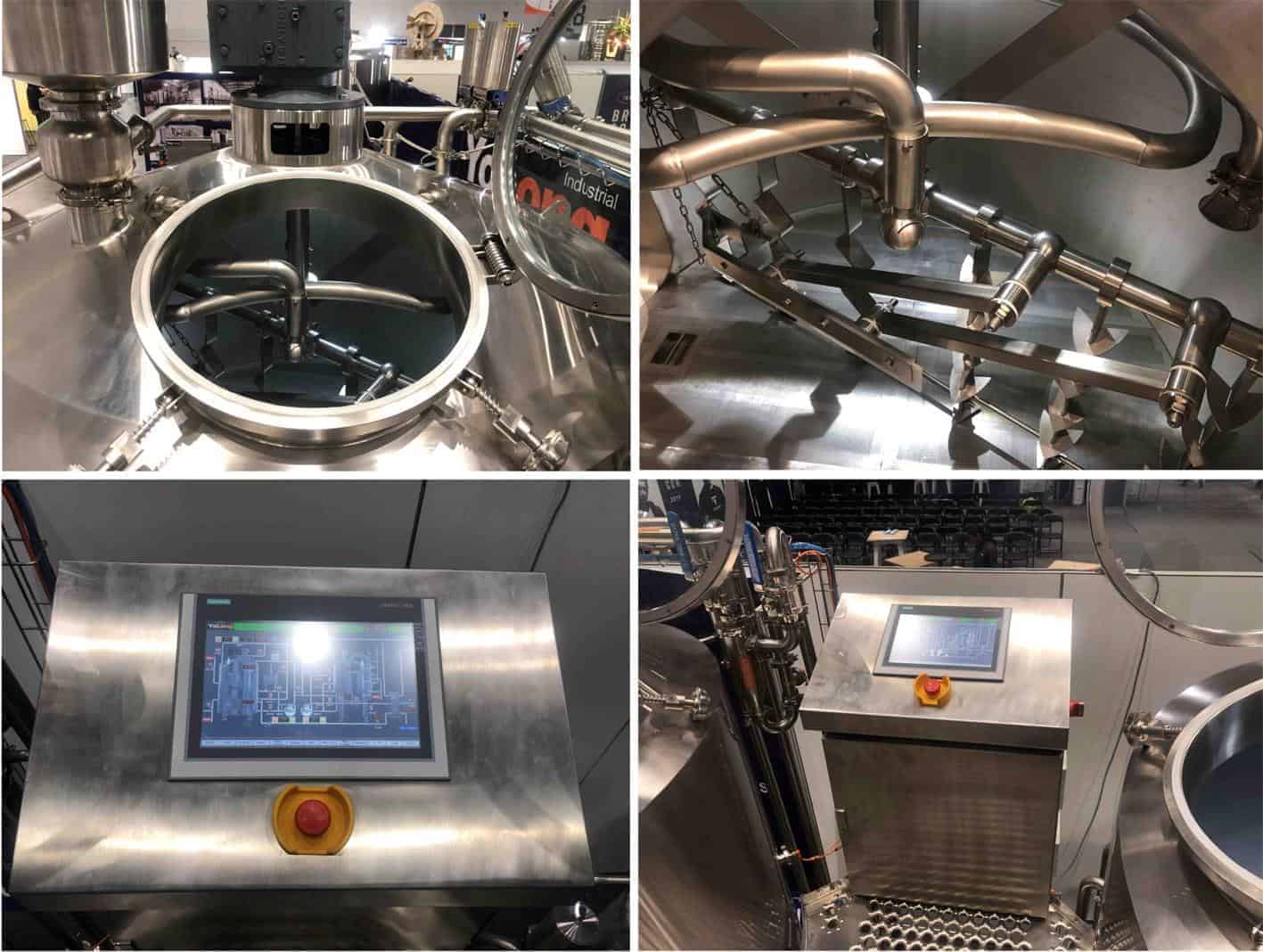 If you are curious to find out what whirlpooling your beer is all about, this is where you can learn more about the process. Whirlpooling is done in the kettle. It is a well-known method breweries use to separate the hop pellets and trub (hop debris) from the wort after it has been boiled. The wort is pumped into the kettle at a rapid velocity (about 15 feet/4.6 metres per second), and this causes the wort to spin around like a whirlpool.

The combination of kettle and whirlpool offer the same properties as a whirlpool on its own. However, the advantages of using the KWP combination system include significantly reduced oxygen uptake. This is because no wort transfer is necessary and it saves time by eliminating the need for separate whirlpool tanks. 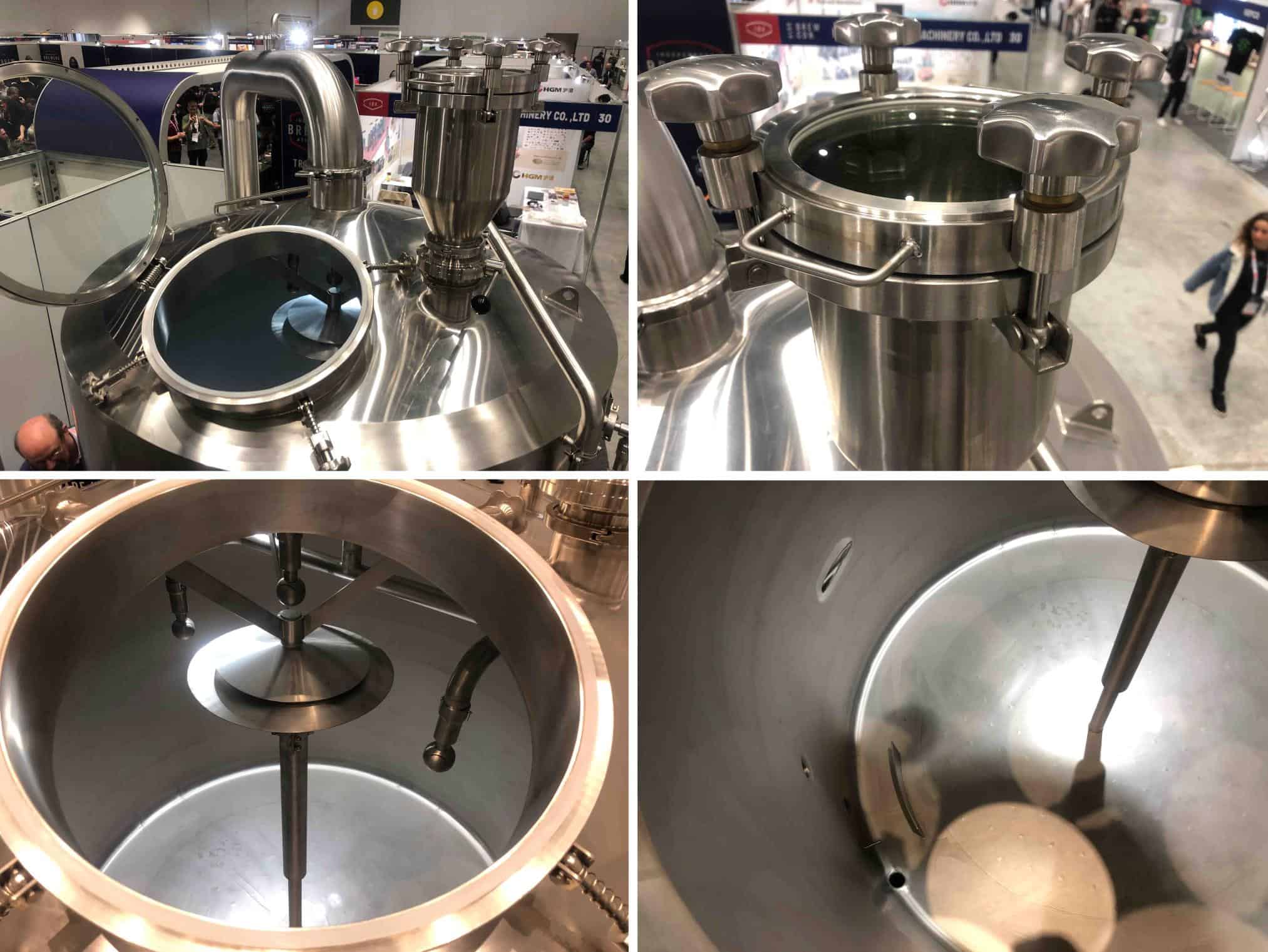 What is the YoLong Fully Automated Brewhouse For?

Because the brewing of quality beer is half science and half artistry, the process can be a difficult one to automate. There are three critical points in the beer making progression on which automation focuses: Mash tun temperature quality and control, wort cooling, and the thermotic control of the fermentation process. 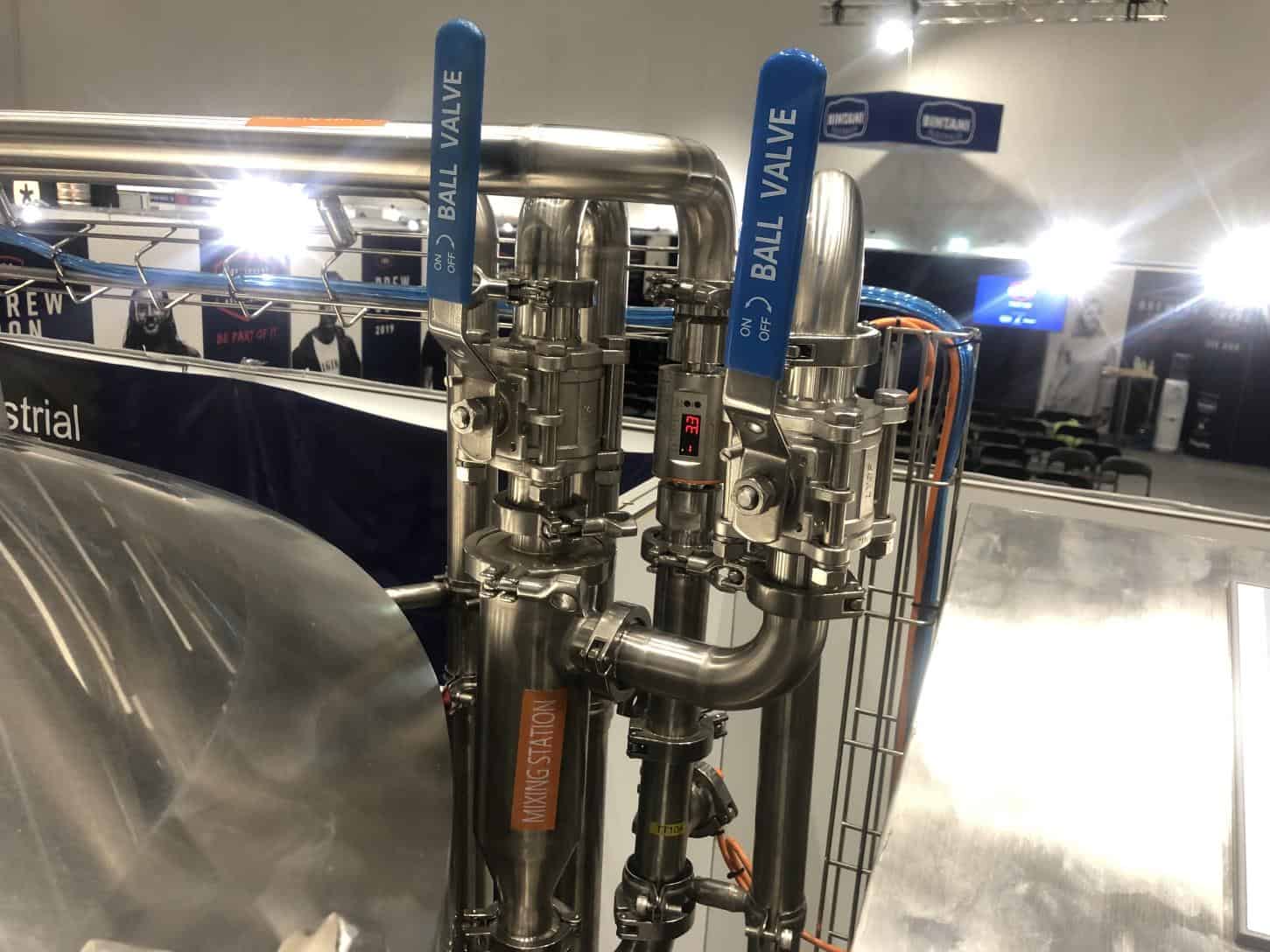 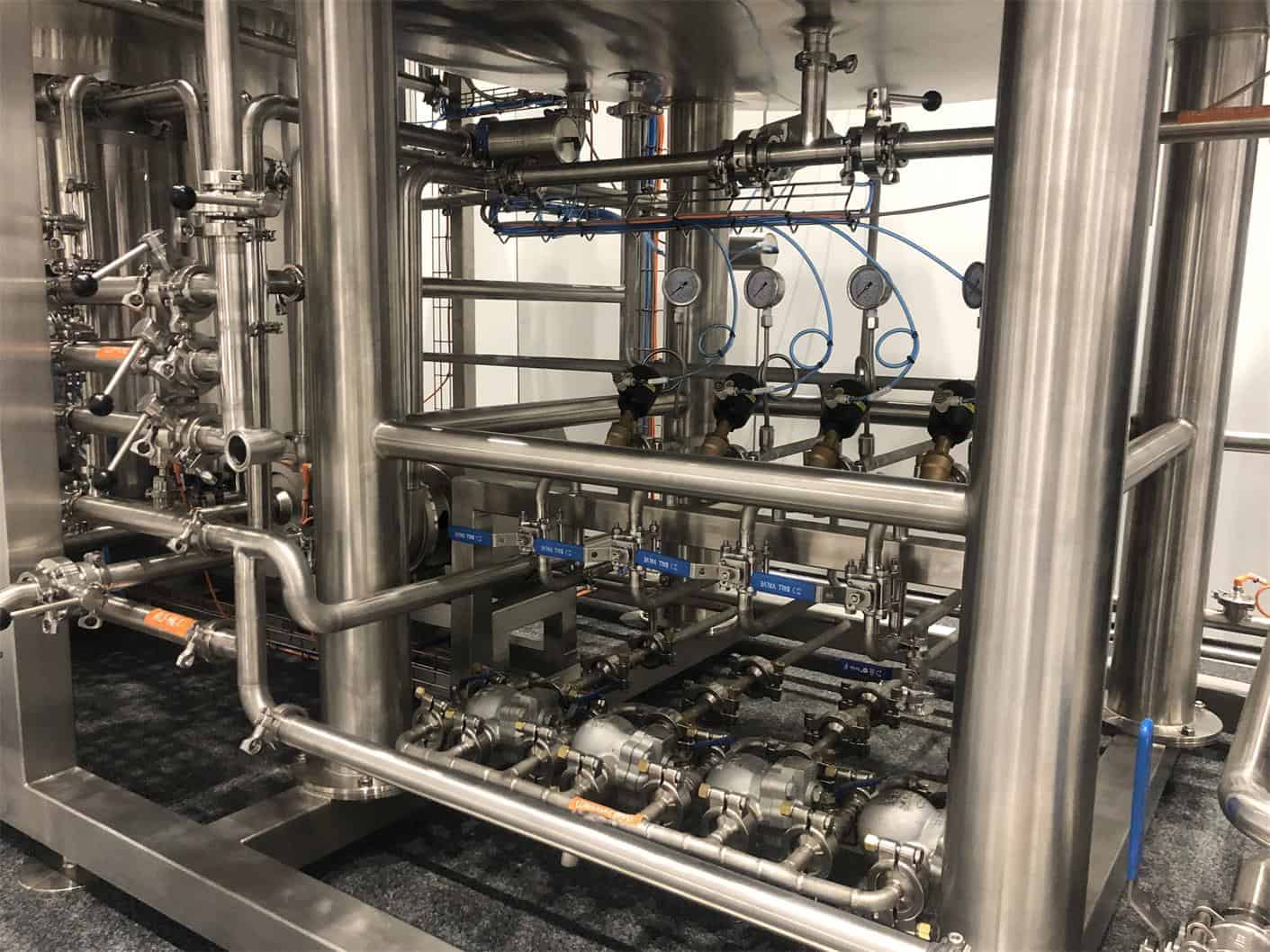 It’s Time to Pack the YoLong Brewhouse for Delivery

We enjoyed our time at BrewCon19 so much, is made us sad to pack up our display, but it had somewhere to be delivered. Adam Gaffney, one of the respected beer judges at the event, had ordered the YoLong brewhouse three months ago, and was kind enough to allow us to exhibit it at the Melbourne Convention Centre.

Needless to say, we packed up everything very carefully and ensured all the equipment was safely transported to its new location. 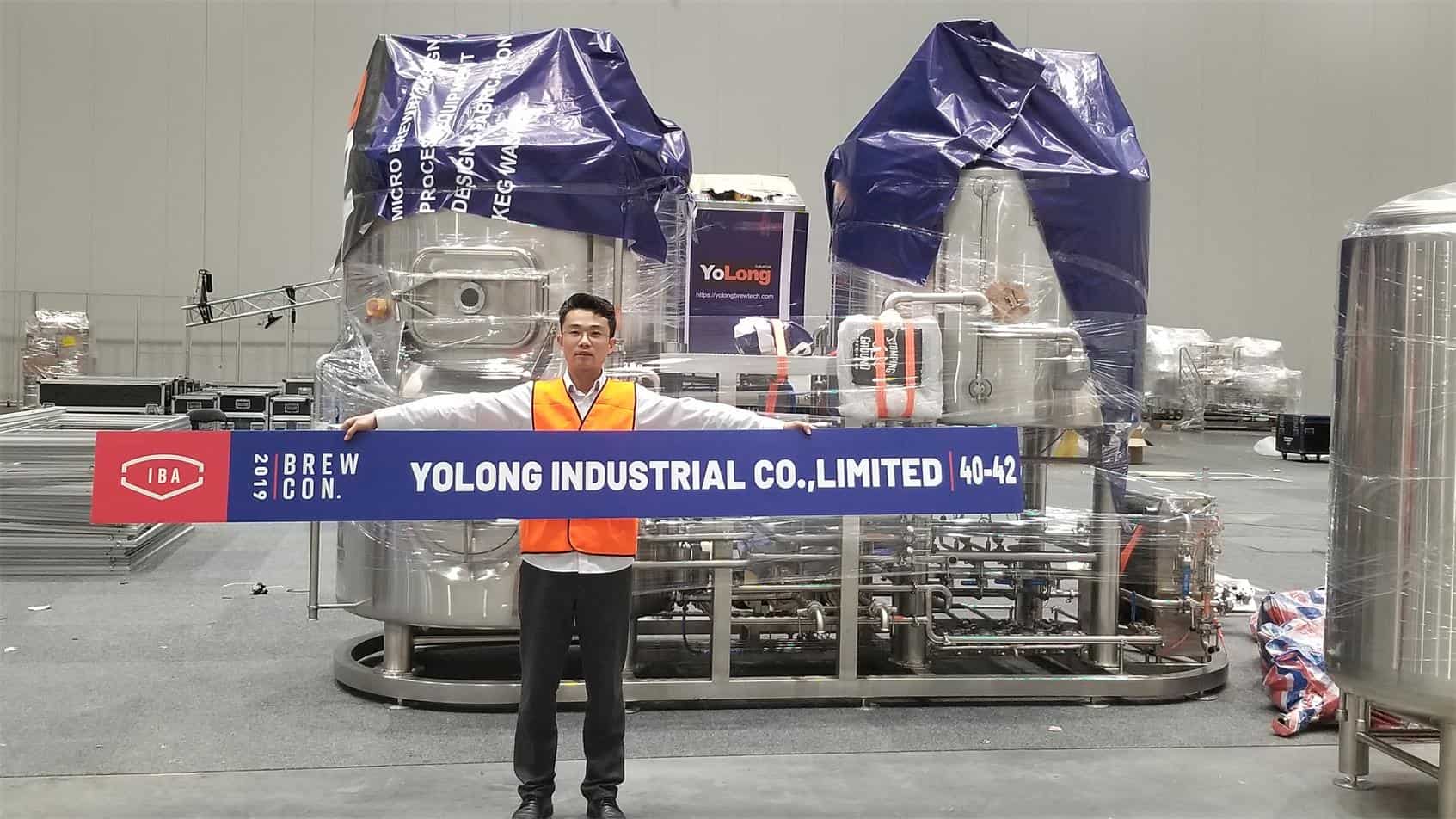 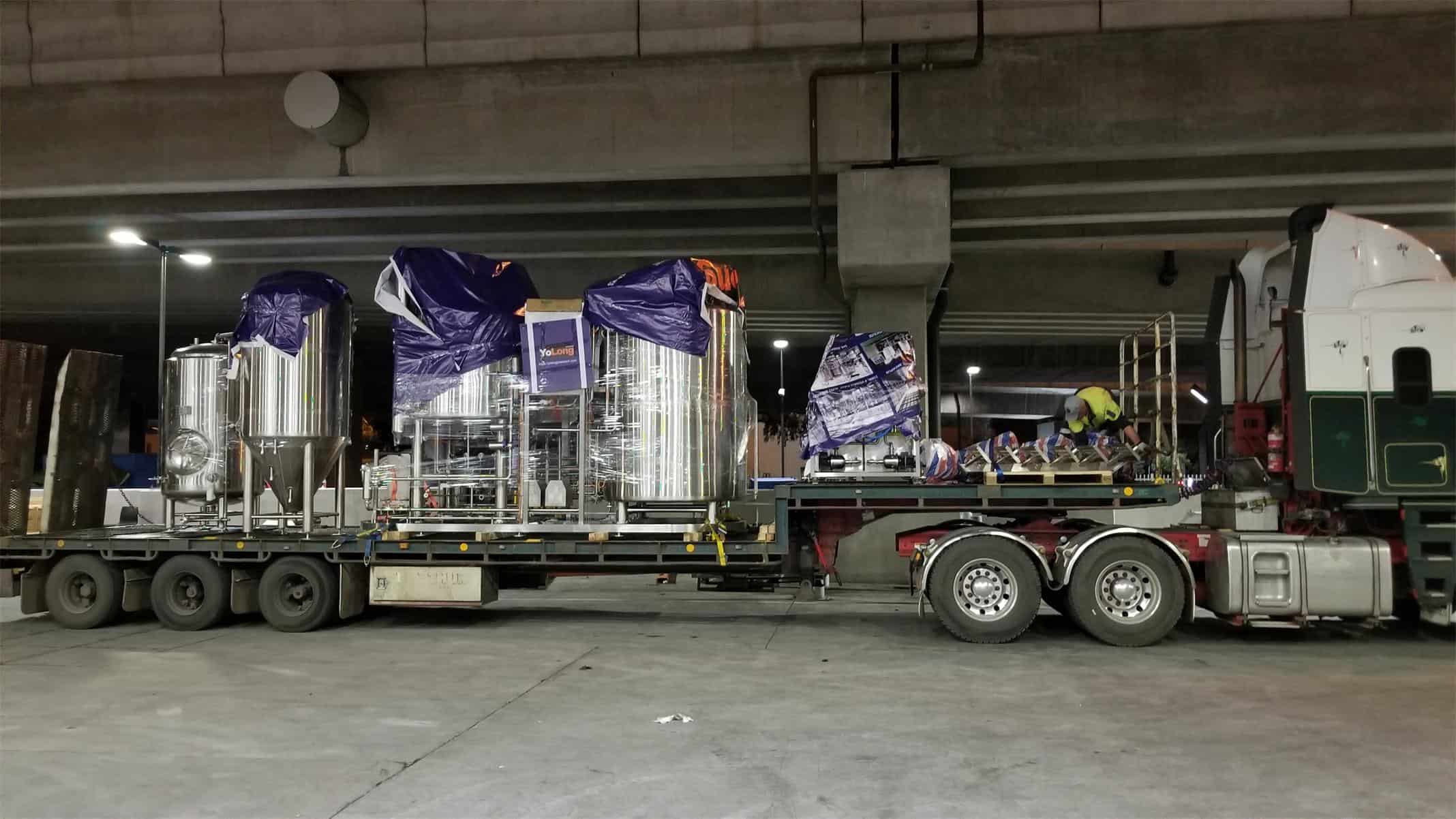 Brick Land Brewery offers a very exciting tour of its premises to those guests lucky enough to be invited to see it. The YoLong team were totally inspired to see some of the functions and production methods of such a prominent local brewery. When our group visited, we were given an exceedingly interesting and informative tour by our guide, Brewmaster John.

It was so thrilling to see the YoLong manufactured 440HL & 220HL BBTS working well on site in this brewery. Currently, Brick Lane have a 50HL automatic brewhouse and auto packing line for cans, bottles, and kegs. Brick Lane has risen to become very successful and well-known in Melbourne and beyond. 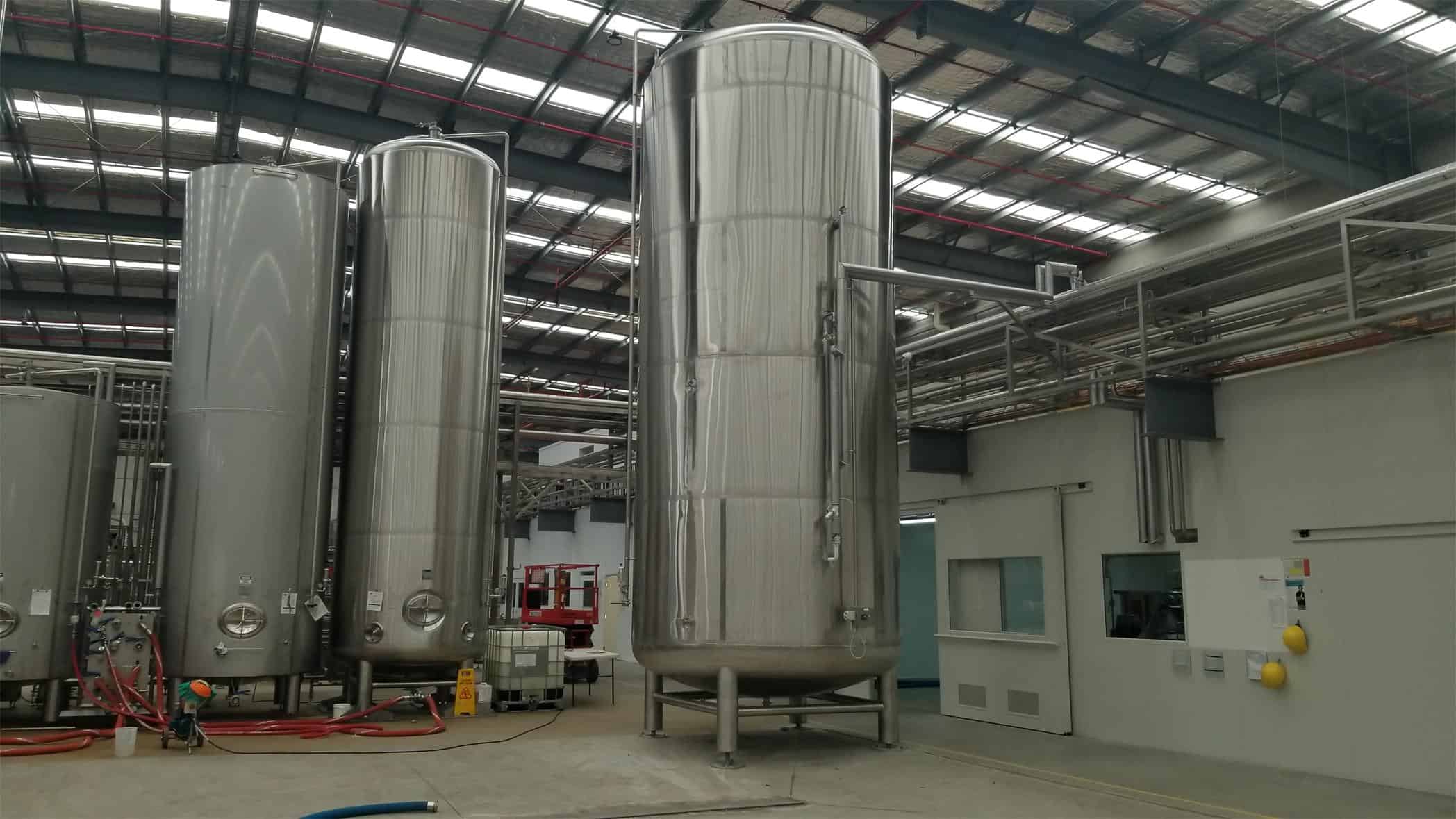 There are 6 x 200 HL fermenters in production at YoLong Industries currently, in anticipation of the Brick Land Brewery expansion in 2 years’ time. That’s something to look forward to in 2021!

YoLong Industries Says Goodbye to Melbourne for Now: See You Again Next Year!

After an enjoyable and productive week in Melbourne, Australia, the YoLong Brewery Equipment team said goodbye to Melbourne with a hearty meal at the Stomping Ground Brewery. What better way to wrap up a working week than good beer, good food, and fantastic people.

Thank you, to BrewCon19, their associated exhibitors, and all our friendly visitors.

What is the easiest way to make beer at home?
Scroll to top