1. Why should the microbrewery equipment be packed, loaded, unloaded in the right way 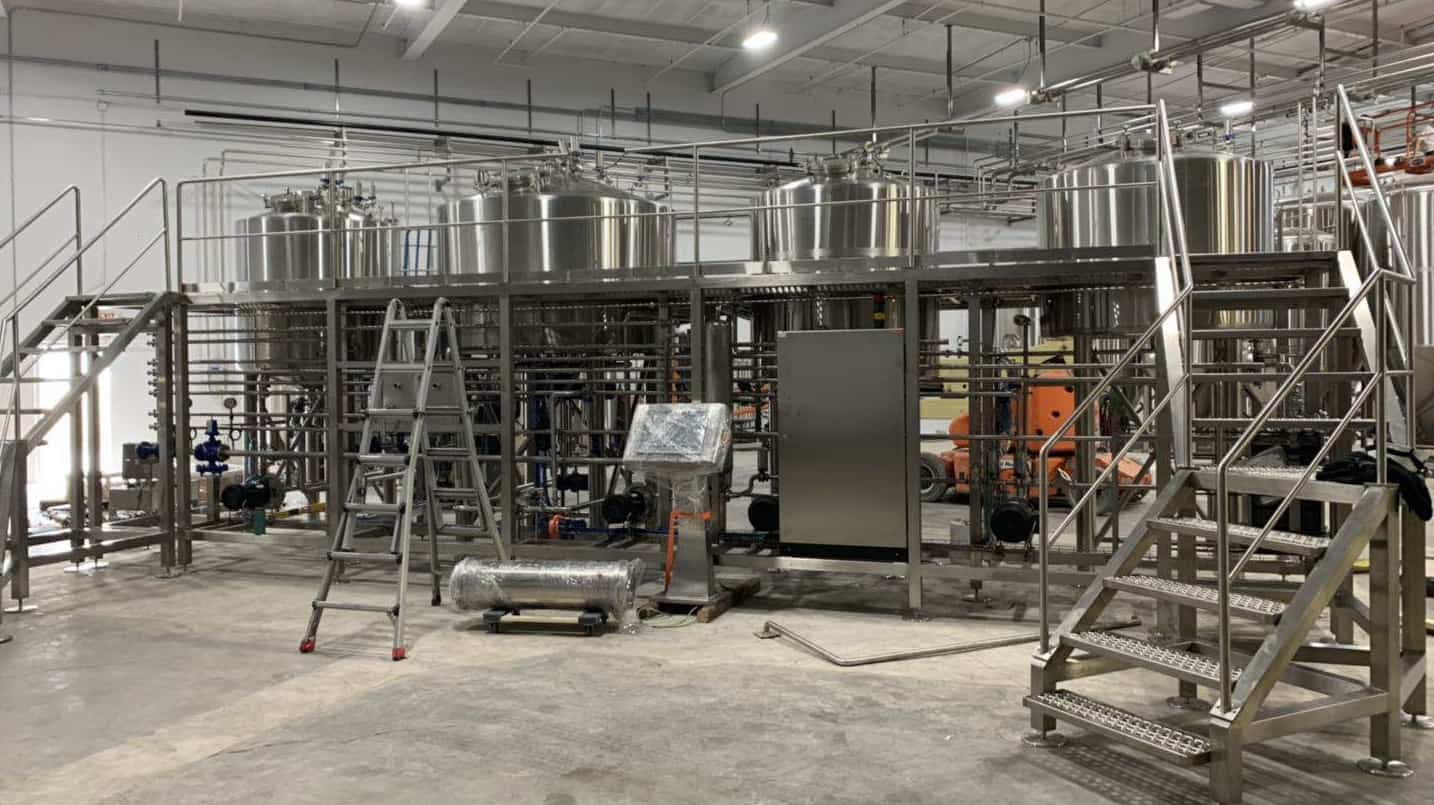 2. How to load the brewing equipment in the different shipping containers 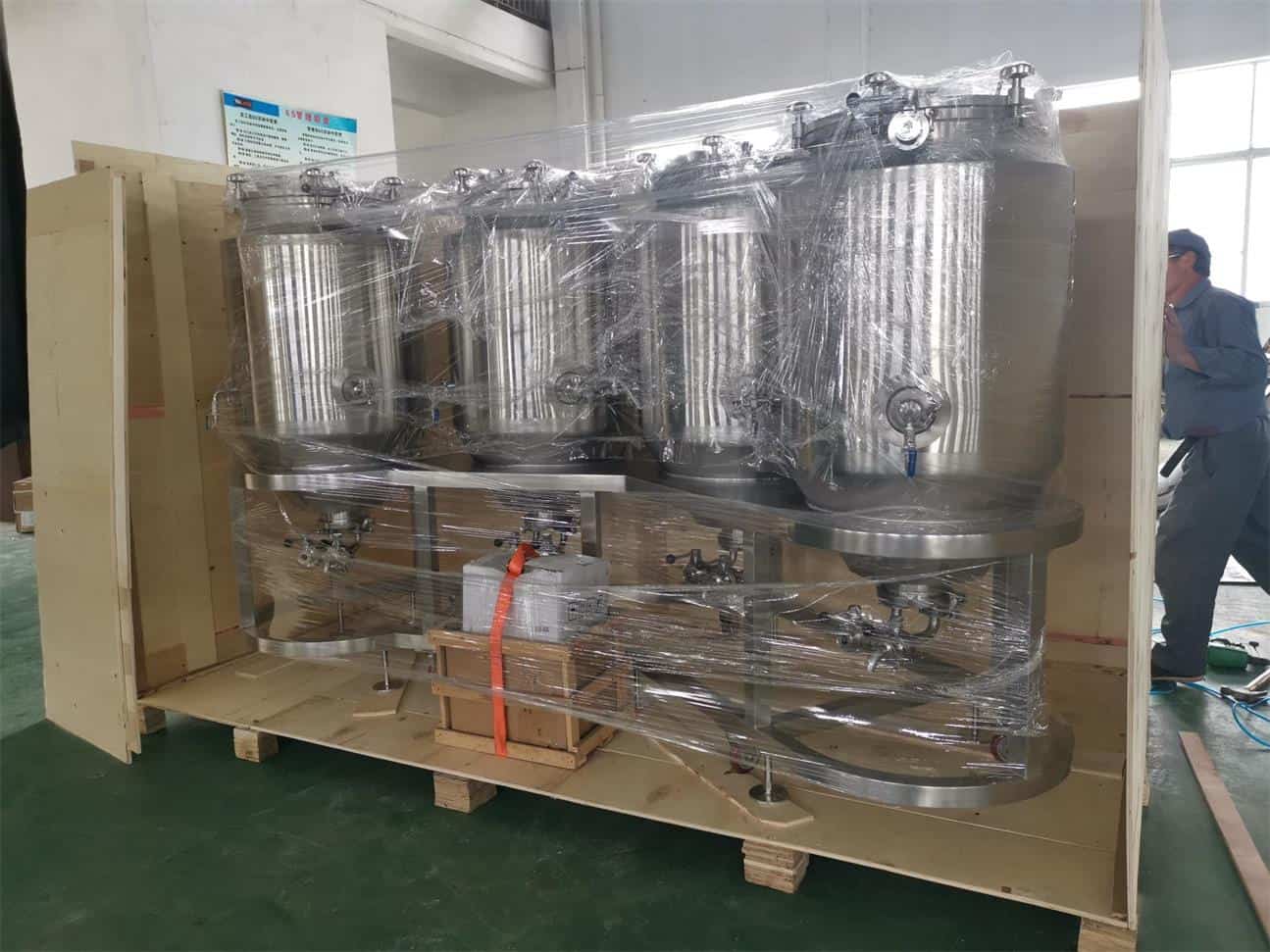 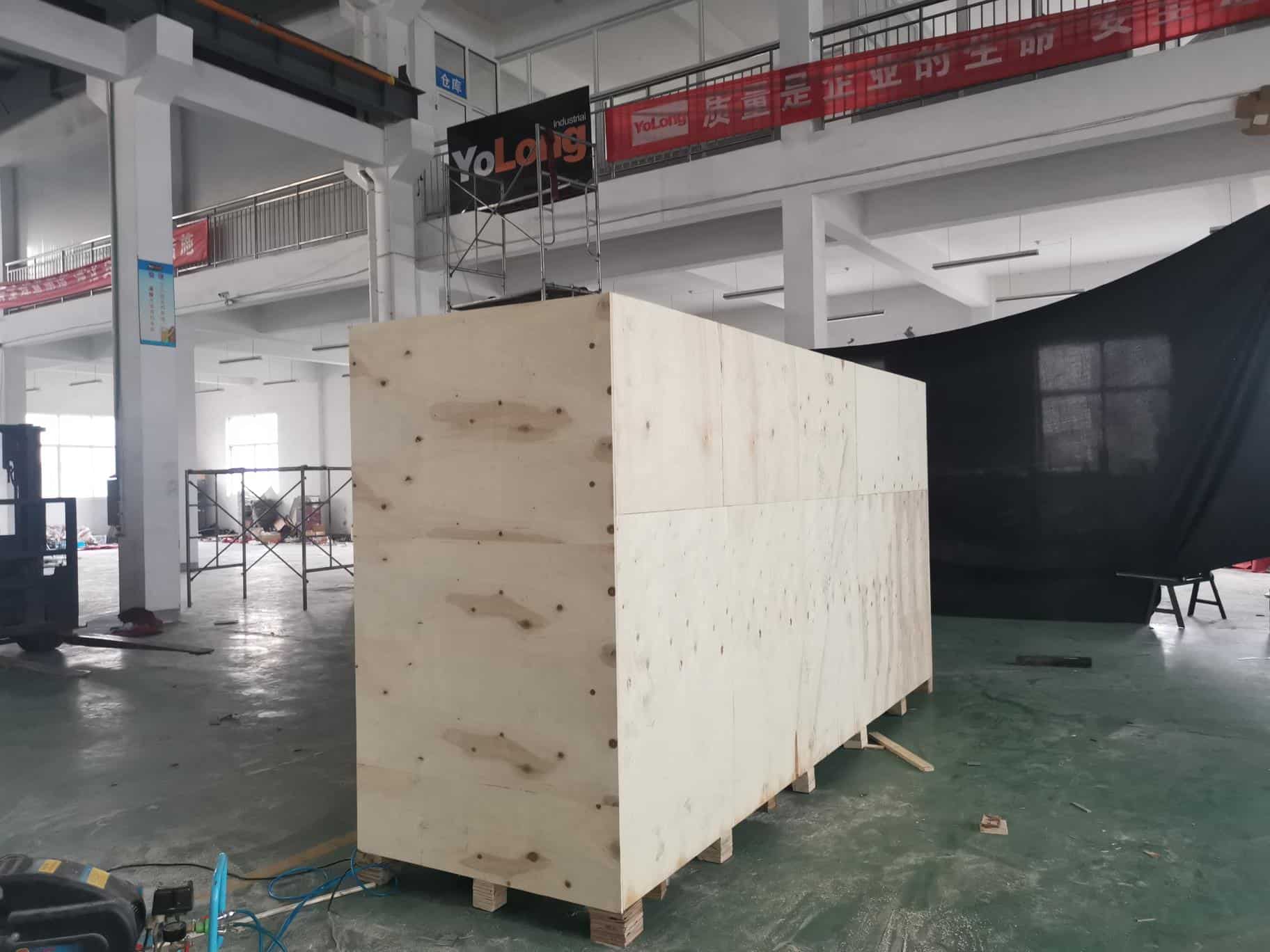  How to pack the brewing tanks
A thin film will be covered in the tank surface, the tanks could be supported by the U-steels with wheels at the bottom for moving conveniently, and then it will be loaded in the plywood case for the protection.

It is the general container for the shipping, internal dimensions is 5950 x 2340 x 2370 mm. The inner space is very small compared with the general 40 feet containers, so it is often used for the microbrewery upgrading or expanding.

For the small fermenter tanks or bright beer tanks, such as 500L or smaller sizes, theycould stand in the 20GP containers with the ropes and feet bolts fixed, so we could save much space in the containers, and also save the shipping fee for the customers.

For the larger fermenter tanks or bright beer tanks, such as 10hL or bigger sizes, they could lie down in the 20GP containers with the U-steel supported, it’s very conveniently to move the tanks because of the bottom wheels assembled in the support frames. 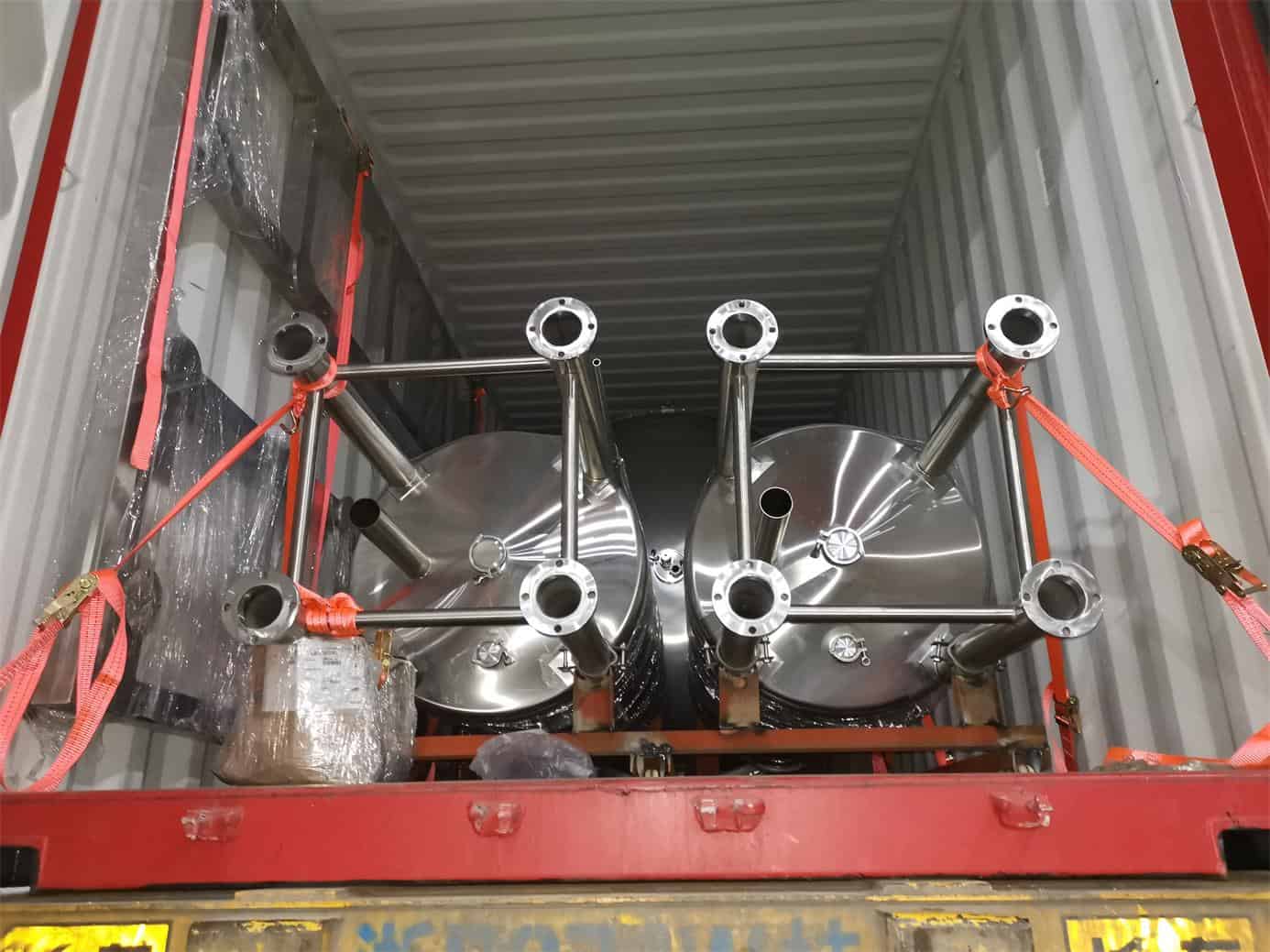 They are the most general containers for the shipping of the brewing equipment, the internal dimensions of the 40GP is 11950 x 2340 x 2370 mm, 40HC container is 11950 x 2340 x 2680mm. The inner space is very big compared with the general 20 feet containers, so it can be not only used for the microbrewery upgrading or expanding, but also for the turn key brewery built projects. And also, the 40HC containers have a bigger internal space than the 40GP containers, but both have a very similar shipping cost, so the former (40HC) is more popular in the shipping of the microbrewery equipment. 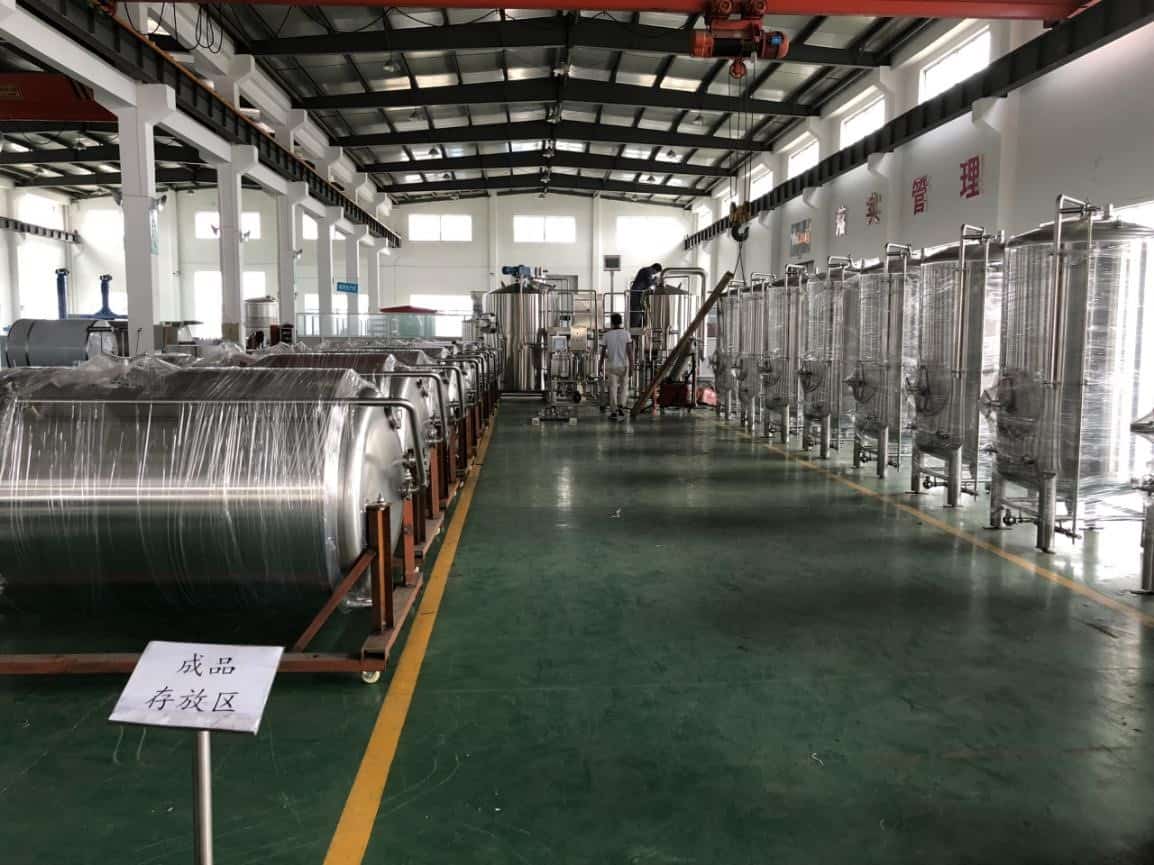 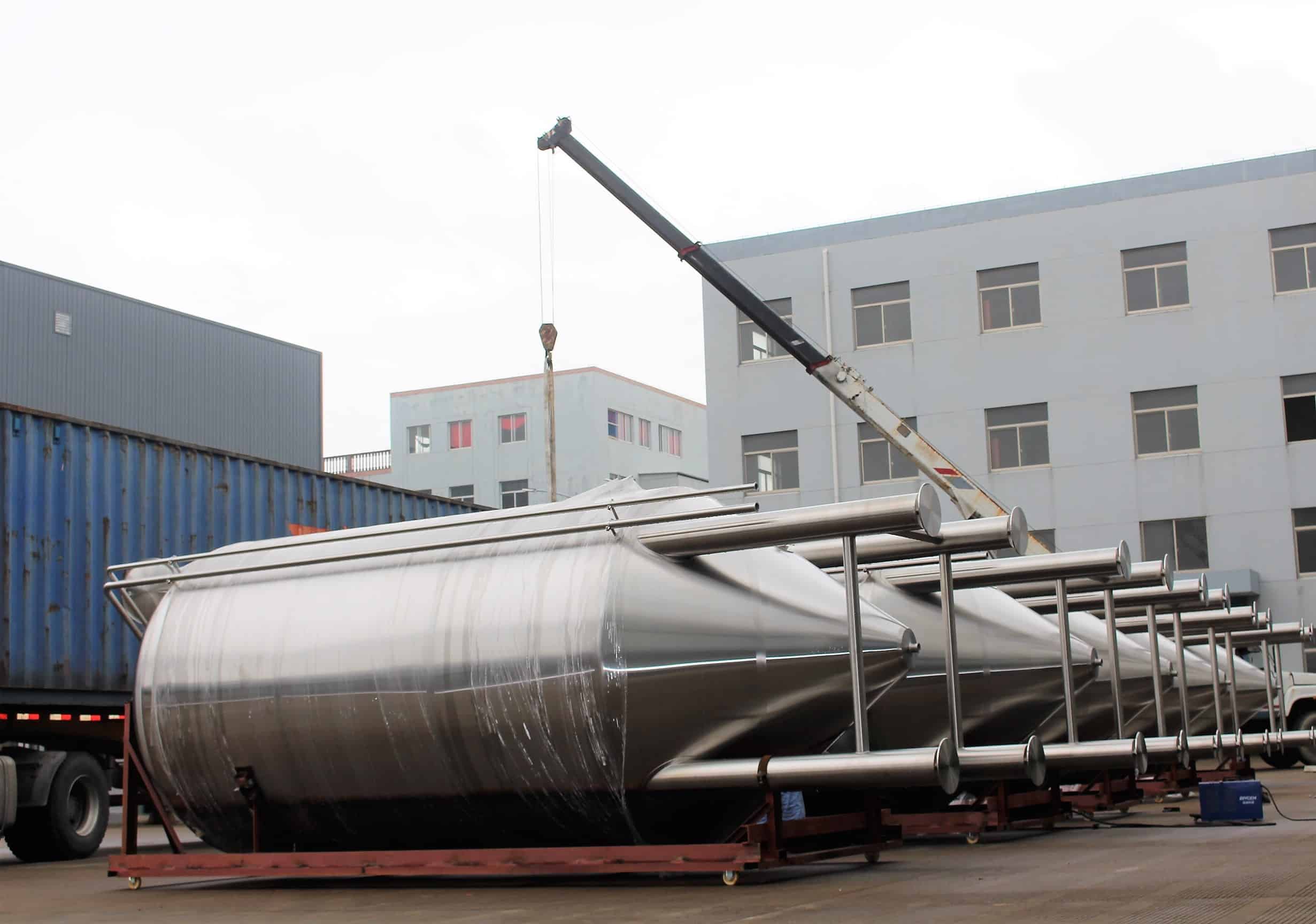 The internal dimensions of the 40FR is 11784 x 2030 x 1943 mm. This container has no roof, no side plates around it, only front and rear plates, corner columns and front and rear roof beams. At the same time, the front and rear plates can be folded. After folding, they are integrated with the floor and look like a flat plate. In addition, the container floor is very thick, and the overall weight is heavier than ordinary containers, mainly used for loading very large tanks. 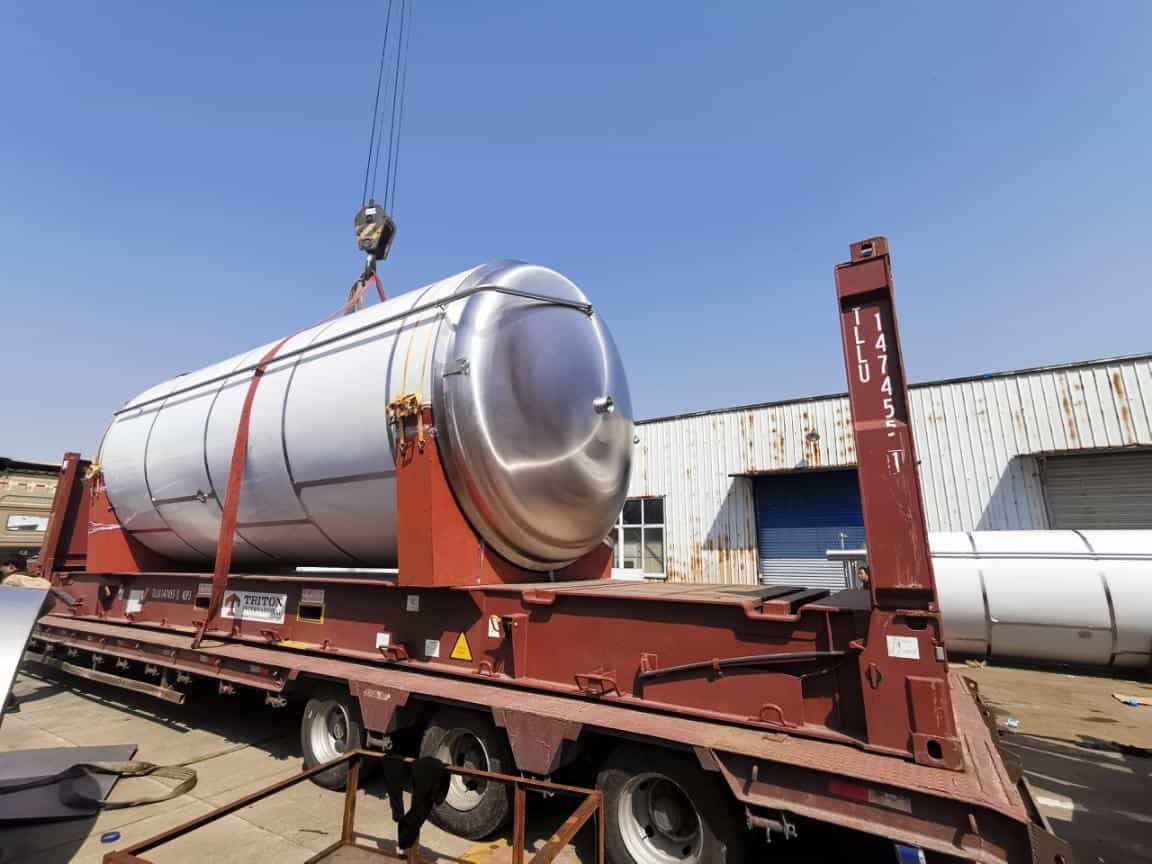 It is the special containers for the shipping of the brewing equipment, the price is higher 30% than the general 40 feet containers. The internal dimensions of the 45HC is 13716 x 2438 x 2890 mm, it is longer than the 40 feet containers and could contain the taller tanks.

3. How would customers unload and reassemble the brewery equipment when the arrival

It’s always a exciting thing when the customers receive their brewery tanks, the first thing should do is to check if all the brewing tanks in good condition without any damages or scratches, and then unload the brewery equipment from the containers and move them to the brewing site.

 For the small brewery upgrading and expending projects

General speaking, there are only few small fermenters or bright beer tanks needed for the small brewery upgrading or expending projects. What should we do is to loosen the ropes and feet bolts that fixing the tanks, and then transfer the tanks from the containers to the brewing site by the forklift truck, it’s a very easy work! 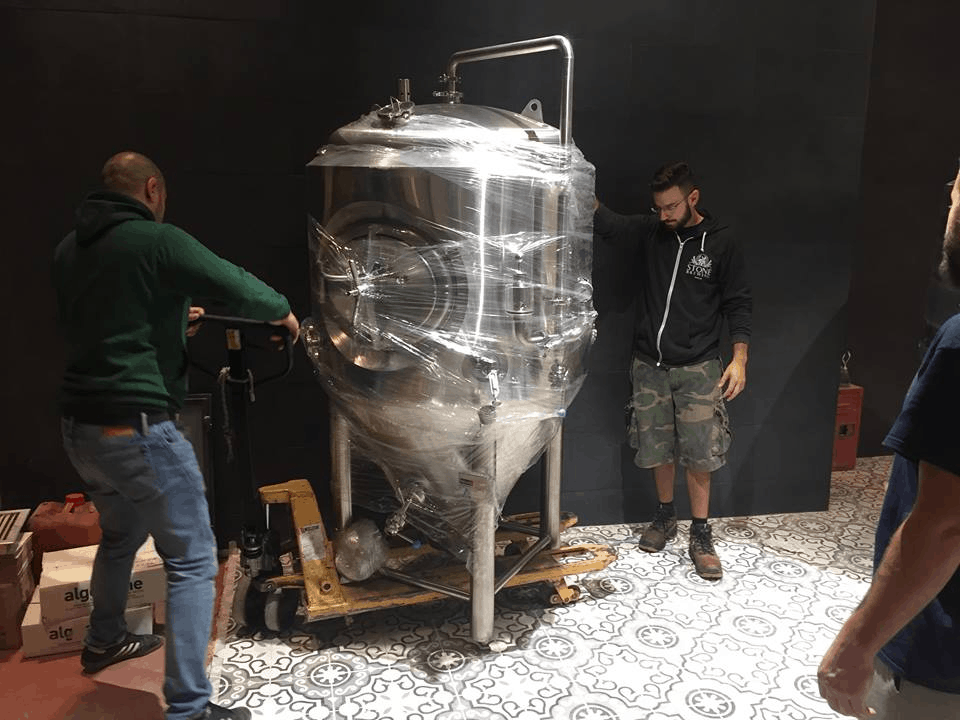 Regarding the small turn key projects, such as 10hL or smaller size brewing system, the brewhouse could be loaded in the general 40HC containers, so the customers could unload them from the containers directly without any adjustment or assembly before the using. 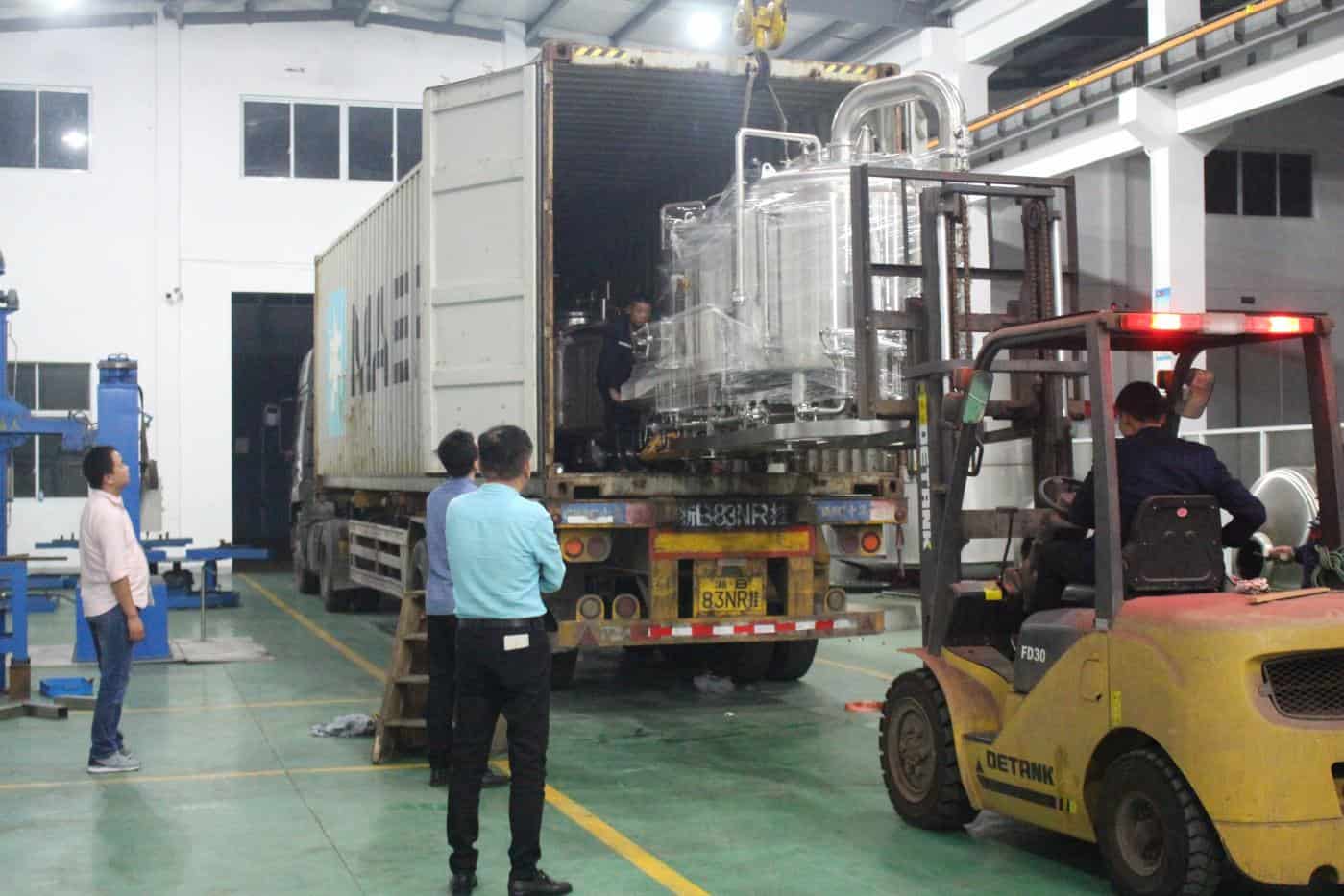 Regarding the large turn key projects, such as 15hL or bigger size brewing system, the brewhouse could not be loaded in the general 40HC containers directly, the brewhouse system has to be disassembled and packed separately before the shipping, so the customers have to reassemble the brewhouse system when they receive the tanks. This is really a difficult work. 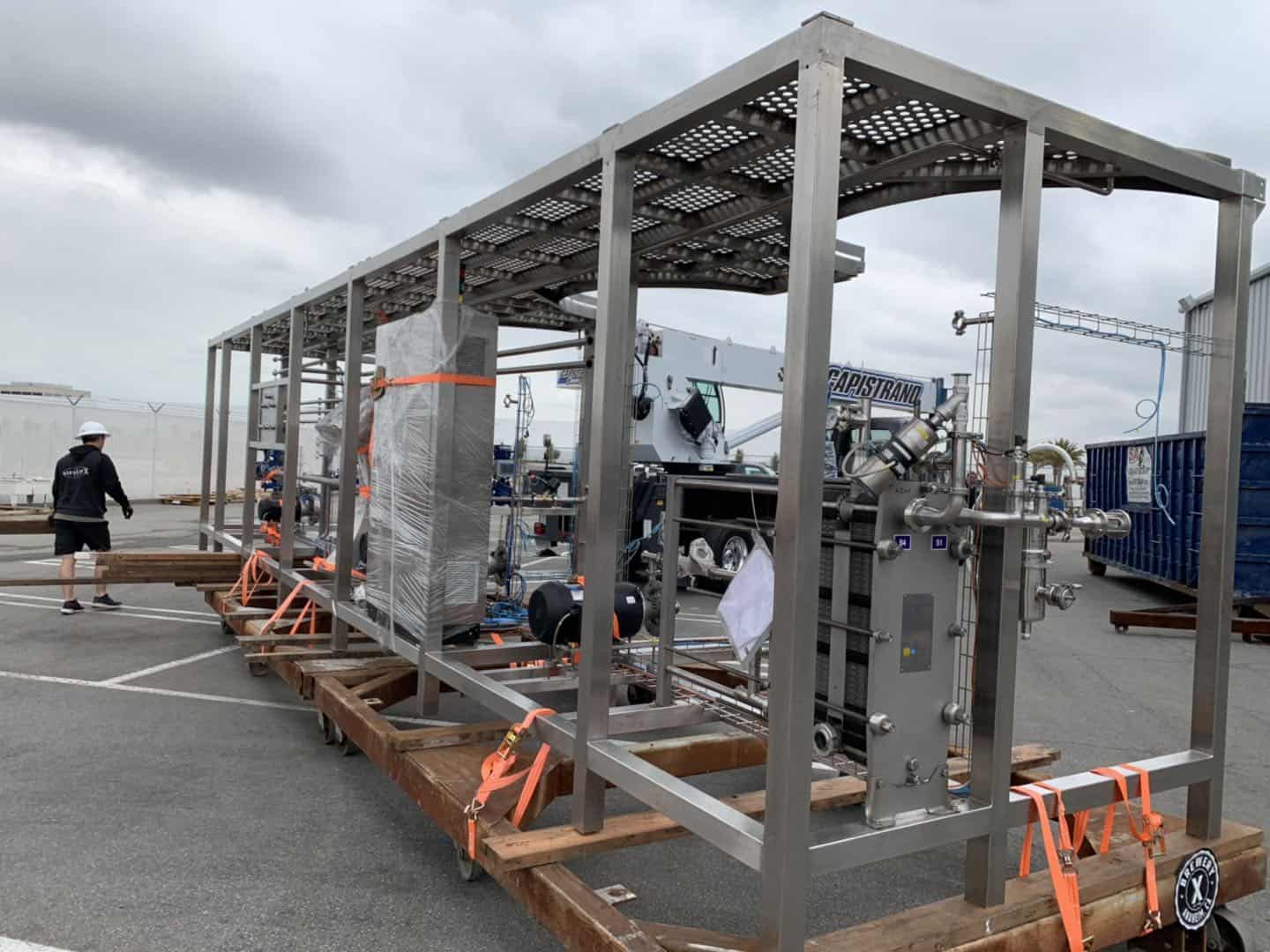  For the very large tanks contained by the special containers

For the large tanks shipped by the special containers, such as 40OT or 40FR containers, the crane machine will play an important role for the unloading tanks, it will handle the brewing equipment from the top of the containers by the ropes, and then deliver it by the the trucks. 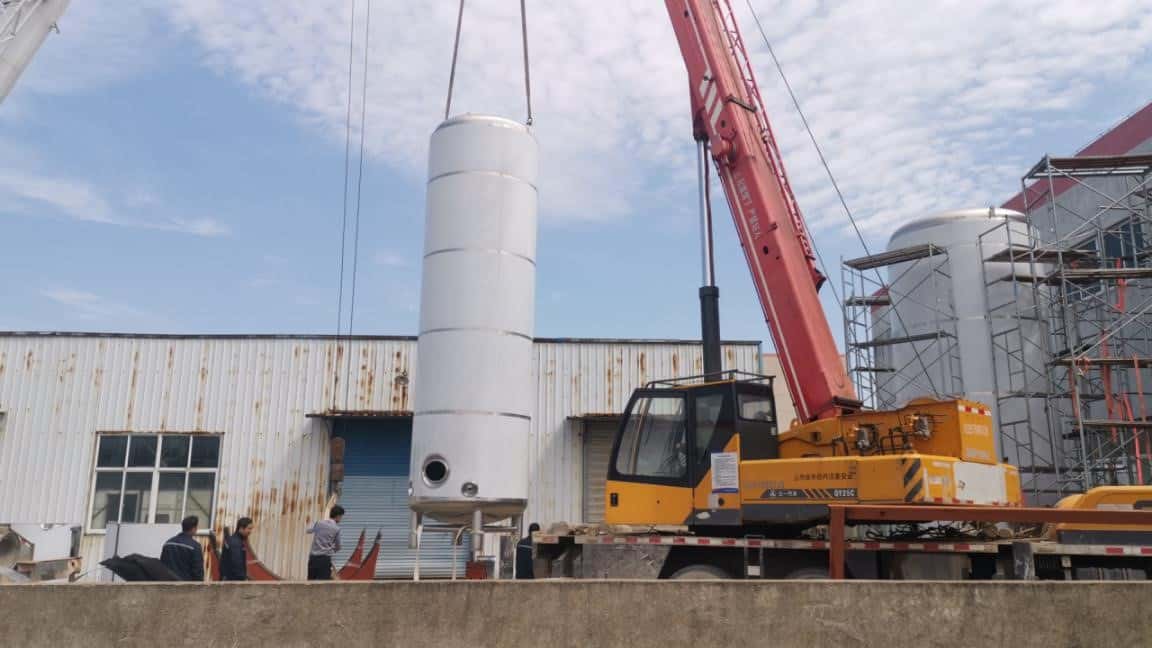 Admittedly, the manufacture process of the brewing equipment is very important for the quality, but the loading, shipping and unloading also play the important roles in the whole turn-key projects process. How to avoid the damages or scratches of the brewing equipment in the handing process is the theme of this article. What we said above are some common attentions in the loading & unloading process of the microbrewery equipment. Hope this could help you a lot if you are a beer lover and are looking to purchase the brewery equipment from the abroad!

What Equipment Is Needed For A Microbrewery, And How Do You Use It?
Scroll to top